Echuca publican Dean Oberin was so frustrated with COVID lockdowns, border closures and density limits, he built a new pub next to his landmark American Hotel on the Murray River.

Taking over 22 car parking spots, the outdoor bar and dining room was built from recycled river red gum timber and opened in the days before Christmas. Named after Oberin’s grandfather, Harry O’s has since become immensely popular and its biggest seller is the yabby po’ boy – a soft bread roll filled with local freshwater crayfish and tangy remoulade.

“This pandemic is not going away, and we are going to have to be flexible well into the future,” says Oberin. “If indoor density limits go down, we still have outdoors. And, God forbid, if we have another lockdown, we now have an outdoor takeaway venue.”

Oberin’s and other hospitality businesses in the twin border towns of Echuca and Moama were hit with “a double whammy” from the pandemic, says Kathryn McKenzie, chief executive of Echuca Moama Tourism.

“We not only lost our tourists, but we lost our local trade with the town cut in half due to police roadblocks on the Murray. Our business owners, however, are truly amazing and to build resilience they had to do something extraordinary.”

The need for outdoor dining space in a COVID world has led to Echuca businesses embracing the town’s forgotten other river, the Campaspe. The smaller river runs parallel to Echuca’s main road but has been obscured by shops since the 1860s.

Anna Thomson, co-owner of pan-Asian diner Monkee & Co, will open a Campaspe-facing cocktail deck at her restaurant in the next few weeks.

“It will be Singapore slings, har gow [dumplings] and bao [buns] by the river,” she says. “If we get further density limits, it will also give us the flexibility to have full a la carte dining. It will be a great experience for everyone.”

It will also be the third structural change Thomson has made to the historic building housing her restaurant since the pandemic began. Last year she expanded the dining room to allow more space between tables; in 2020 she punched in a streetside window to serve contactless takeaway.

Next door to Thomson is The Social Wine Bar. Opening last year, the owners were attracted to the site for its river access. Specialising in Victorian wines, the bar now has a licensed courtyard facing the Campaspe, shaded by a towering Norfolk pine.

“I suppose COVID has forced us to open up to this beautiful landscape,” says Thomson. The additional space will also help businesses absorb the surge during events such as the annual Southern 80 water-ski race when the town’s population almost doubles.

Meanwhile, Morrisons Riverview Winery Restaurant & Brewery sits across the Murray near the NSW town of Moama. Chef Troy “Snappy” Jarrett says as many customers as possible are seated on outside decks and picnic tables.

At peak times, instead of turning people away, Morrisons visitors are directed to Hungry Goat deli back in Echuca to buy their own picnic supplies.

“People can bring their picnic or have it delivered here,” says Jarrett. “They can throw a rug on the lawn, and as long as they strictly buy all their booze from us, they can stay as long as they like.”

Upstream from Morrisons is the Riverbank Restaurant housed in a former historic homestead looking out over the Murray. The building and large deck under the gums were refurbished by new owners Paul and Nikki Cohen at the height of last year’s COVID outbreak.

Renovations were done by local tradies who donated their labour on the promise they would be paid when the restaurant became profitable.

Notably, the Cohens run against the trend in the region by targeting their hospitality business to locals rather than tourists.

“We use social media to talk to the people of Moama and Echuca and they respond,” says Nikki Cohen. “Yes, we are surrounded by a riverside resort, but we don’t want to rely on tourists.” Paul Cohen adds “they are welcome, but tourism is a boom and bust cycle”.

“In this pandemic world we don’t know when they may be stopped [from crossing the border] again.”

HAVE YOU HEARD OF A HOTEL “BOOTS”? 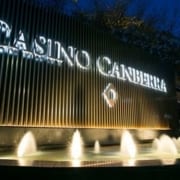 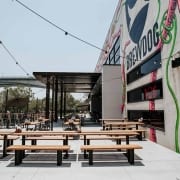 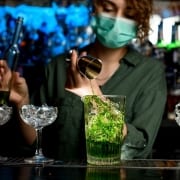 PUB & ENTERTAINMENT NEWS: THE ESPY IS BACK & RETURNS TO LIVE MUSIC

AHA NSW 2016 AWARDS FOR EXCELLENCE – ALL THE WINNERS